From the opening shot of a Jurassic Park-esque reptilian eye, you know you are in for a wild ride. As Mick “Crocodile” Dundee sits in a canoe sharpening his famous knife, a monstrous croc hides somewhere in the deep. The croc suddenly attacks, tearing Mick’s boat to pieces and leaving him and mate Jacko up a tree. Life for Mick can only get easier, right? When Mick arrives at home, he discovers longtime companion Sue’s newspaper-mogul father has called, and needs her help on an article at the paper’s Los Angeles branch. Mick, who recognizes his importance in the modernizing bush is now no more than as a tourist attraction, agrees to join her, and together Mick, Sue and son Mikey head for Los Angeles. Here the adventure truly begins, as Mick and Jacko brave a cowboy bar where the horsemen are of a different color, and a Hollywood film party where everyone seems interested in Mick’s mate Malcolm “Mal” Gibson’s colorful exploits. Sue’s article soon leads to a sleazy film producer, so …
Tech specs – Reviews
Title: Crocodile Dundee in Los Angeles
Duration: 1 hr 34 min
720p.WEB
Aspect Ratio: 1280*720
Frames: 23.976 fps
Audio: English 2.0
Size: 871.42 MB 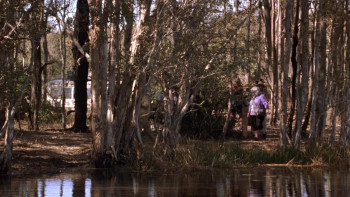 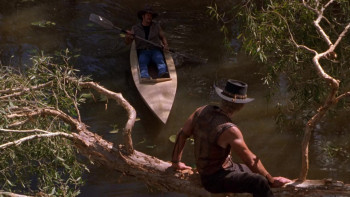